This pilot program is a key component of the Fayetteville Outdoor Refreshment Area (ORA) ordinance, which enables the City of Fayetteville to explore if an open consumption district is a good fit for our downtown. The pilot program comprises a smaller subset of streets inside the boundaries of the ORA in which businesses would be able to sell alcoholic beverages "to-go" that could be consumed within the defined area. To begin the program, City staff has numerous requirements that must be completed first. You can learn more about these requirements here.

What is the status of the pilot program?

Cups are being ordered and wrist bands have been received! This week City staff has begun the following items:

The proposed pilot program area was developed in close coordination with downtown businesses and the Fayetteville Police Department. Its four-sided design is aimed at making the boundary not only simple to understand, but also easy to enforce. The pilot program proposes an area between the streets of Watson to the north, Mountain Street to the south, East Ave to the east, and West Ave to the west. Approved routes outside of the four-sided area ensure businesses west of West Ave, and in the Mill District can participate in making to-go sales.

What do the green lines mean? The green lines annotate the primary pilot program area where alcoholic beverages in designated cups can be consumed by attendees. It’s four primary sides are designed to make understanding the boundary easier.

What do the green dashed lines mean? The green dashed lines are also in the pilot program area, these routes aim to expand the ability for businesses to sell "to-go" ORA cups to patrons. As an example, residents could walk from the Square to the Mill District and vice versa and possess and consume alcohol in designated ORA cups. 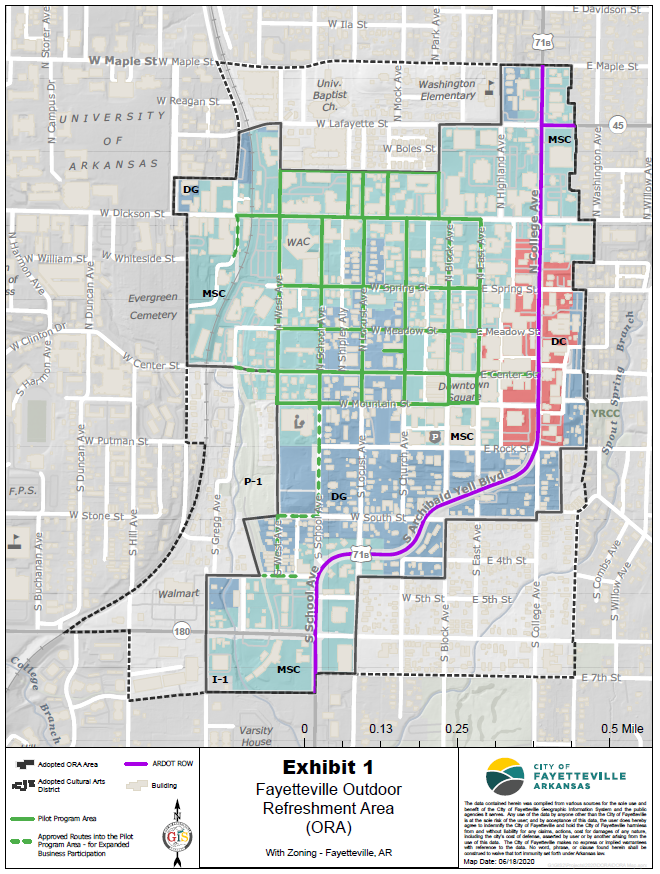 What dates and times are being proposed?

During the development of the Outdoor Refreshment Area ordinance and phasing plan, beginning the Open Consumption District pilot program on slower days of the week was proposed as a means to increase sales on the slow days. City staff feels it is important to maintain consistency with what was originally proposed by starting the program on Sunday-Wednesday. Many businesses have requested the program be extended to seven days a week due to the economic hardships caused by the COVID-19 pandemic. Per the City’s Phasing Plan, extension beyond Sunday-Wednesday would only be through strong communication and collaboration with businesses and stakeholders in the area.

What are your thoughts on the overall district and days of the week? Please let us know by filling out this brief questionnaire.

What are the rules of the pilot program?

The proposed rules of the pilot program are simple. The rules are also rooted in City law pursuant to the Outdoor Refreshment Area ordinance.

How does an alcohol-serving business within the ORA sign up to serve to-go in the pilot program?

Businesses who wish to serve to-go during the pilot program are asked to email the Department of Economic Vitality by clicking here. We will be scheduling a few orientation sessions to go over the logistics and rules. Not sure if you want to participate right away? That is perfectly fine. You may apply to participate after the pilot program begins.