As part of the City of Fayetteville's Solid Waste Reduction, Diversion and Recycling Master Plan (SWRDRMP), in 2016, a single stream recycling pilot was conducted in select neighborhoods to study alternative methods for collecting household recyclables."Single stream" means that all recyclables go into the same cart. The pilot program generated data to evaluate the effectiveness of cart-based, single stream recycling collection.

Waste audits conducted by Kessler Consulting Inc. found 26 percent of materials that could be recycled in our current system of collection were being thrown away. To address how the City can recover these materials, staff looked at a single stream model as an alternative collection method.

The pilot began on Feb. 18, 2016, and ended three months later, on May 19, 2016. Residents were given a 64-gallon cart with a blue lid for the duration of the pilot and returned to using curbside green bins when the pilot ended. An evaluation of apartment recycling ran from March 28 through June 25 and was evaluated separately from the residential collection. The two complexes that were evaluated were the Cliffs II and The Academy at Frisco.

After considerable discussion, staff recommended a compromise to the original implementation plan put forward by Kessler Consulting.  There were many factors that influenced their recommendation not to pursue the single stream recycling method at this time.  One of the main reasons which was born out by the pilot study was that Fayetteville’s volume alone is not enough to support a single stream processing facility in a financially sustainable way.  Combined volumes from our neighboring cities are needed to support a capital expenditure of this nature. The City Council agreed that it was more important to move ahead with the other goals in the implementation plan such as composting, increased recycling at small-scale apartment complexes, and construction/debris recycling to work toward a new goal of 40% diversion.

You can read more about the Single Stream Recycling Pilot here: 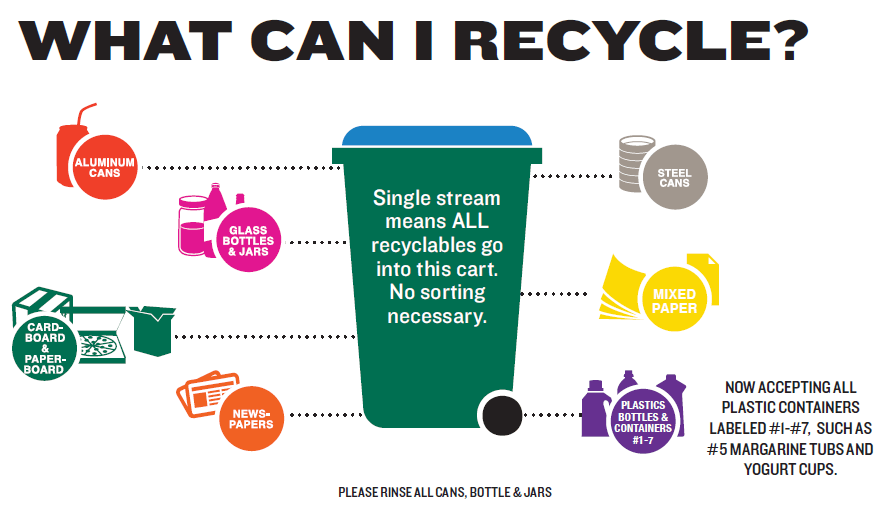