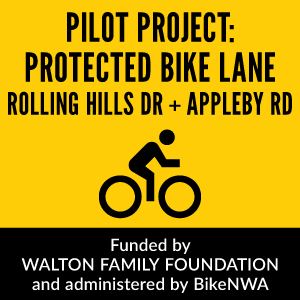 In November 2018, Fayetteville joined Springdale and Siloam Springs in a 12-month “Protected Bike Lane Pilot Project” funded by the Walton Family Foundation. BikeNWA, a Northwest Arkansas region bicycling advocacy organization, designed and planned the lane installations in cooperation with consultants and the staff from the three cities.

The pilot program concluded at the end of 2019. The black bumpers used for the pilot will be replaced with rumble strips and reflectors until the planned improvements for Rolling Hills are completed in 2022. View future Rolling Hills improvements information.

The “test before you invest” intention of the pilot is for these temporary roadway retrofits to test the use of protected bike lanes to connect existing bicycling infrastructure such as trails and bike lanes. The goal of the pilot is to increase the level of comfort felt by bicyclists and ultimately, the number of riders. Data of bicycle counts as well as vehicle counts, and speeds were collected prior to the installation and will be compared to counts taken during the pilot period.

In Fayetteville, two roads were chosen for the pilot:

To learn how you can volunteer and more information about the Fayetteville or other pilot projects, please visit this BikeNWA webpage.