Fayetteville residents with concerns about excessive traffic speeds in their neighborhood may apply to the City for traffic calming measures to be implemented.

The process involves the following steps:

Please remember that although traffic calming strategies can have the desired benefits in the targeted area, they also can create disadvantages to adjacent streets and neighborhoods. These factors are taken into consideration by City staff when reviewing traffic calming requests. 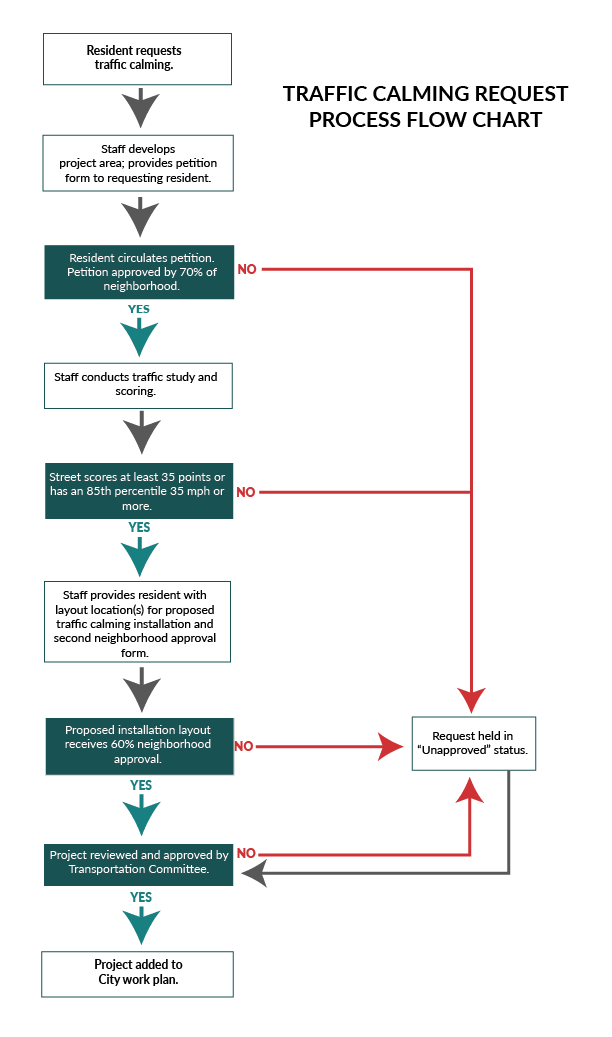 Residents can make a traffic calming request by emailing the City's Engineering Department. Complete the online form. The City will review the request and determine the area that would be affected if traffic calming measures were put in place.

A City staff member will then get in contact with the requestor with next steps, which include circulating a neighborhood petition within the affected area to gather signatures of approval from a minimum of 70% of the property owners on the targeted street(s).

Requests for traffic calming will be assigned to one of three tiers:

Assessment of Proposal and Traffic Study

City staff will review each request on a case-by-case basis to assess whether other streets may be impacted by implementation of traffic calming strategies. If the request meets required standards, Tier 1 and 2 requests will then receive a traffic study.

The data collected in the traffic study will be used to assign point values as detailed below. Locations receiving a minimum of 35 points, or that have 85th percentile speeds above 35 mph will receive further consideration for traffic calming.

Where traffic calming may be appropriate, City staff will present options for traffic calming in the affected area. Sixty percent (60%) or more of the property owners in that area must support the proposed strategy before the City will give further consideration to traffic calming implementation.

City staff will prioritize approved traffic calming proposals. The City Council Transportation Committee will approve projects to be implemented up to the yearly budget as determined by Council. Those approved proposals not selected will remain in consideration for up to three years.