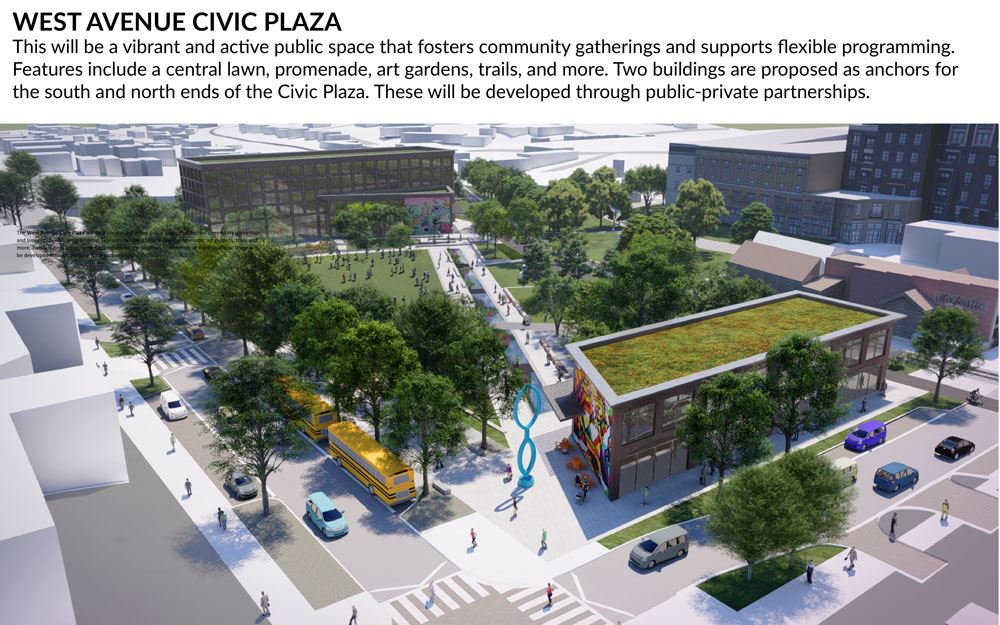 The City of Fayetteville is seeking proposals for the development of a building located in the recently designed and funded West Avenue civic space in downtown Fayetteville.  The civic space is a key element of the City’s Cultural Arts Corridor, now known as The Ramble, which links some of Fayetteville’s cultural and natural attractions with the downtown area and entertainment district.

This opportunity for partnership comes at an exciting time in the revitalization of downtown Fayetteville. The City is investing over $31 million in the development of the Ramble, financed through the passage of a larger $226 million public infrastructure bond issue in 2019. The three major elements of the Ramble are the Fay Jones Woods with streetscape and trail improvements, a new 300-space parking deck located at West Ave. and Dickson St., and the civic space with anchor buildings for this site.

The design for the civic space consists of a gathering and event lawn, public plaza, garden spaces, and a civic promenade. The building site—midway between the downtown square and the University campus, and adjacent to the Razorback Regional Greenway—ensures that this project will contribute to creating a dynamic and experiential place.

The site currently consists of a surface parking lot. A new parking deck will be constructed at the corner of West Ave. and Dickson St. to more efficiently serve the parking needs of the Ramble and the Dickson St. Entertainment District. The civic space is scheduled for construction in the spring of 2022 with completion in early 2023. This building site will anchor the southern end of the civic space.

The City is looking for innovative development proposals for this southern anchor building that are both beautiful and of exceptional architectural quality and materiality befitting this extraordinary location. Ultimately, the City envisions this building as a model demonstration of high-quality urban design that will set the standard for future downtown development.

The City of Fayetteville issued a Request for Proposals on August 29, 2021, for development of the West Avenue Civic Plaza, a key element of the City's Cultural Arts Corridor Project. Proposals were accepted on October 26, 2021.